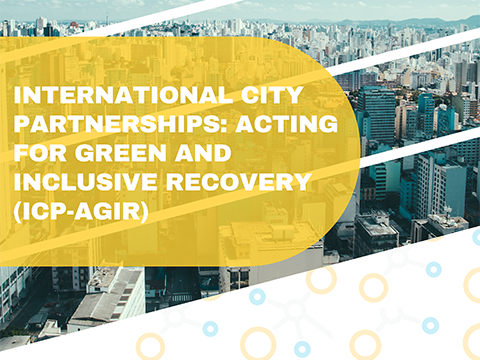 The International City Partnerships: Acting for Green and Inclusive Recovery is a project of the European Union and managed by the Directorate-General for Regional and Urban Policy (DG REGIO) of the European Commission. The project will be implemented from October 2021 – March 2023 and originate in a pilot project of the European Parliament. The objective of this project is to contribute to the improvement of quality of life in participating cities, by promoting sustainable and integrated urban development, through the identification of innovative policies and programmes. There will be four cities selected from Canada, and four cities selected from South Africa. In addition to Singapore and Hong Kong, there will be a selection of two South Korean cities and two Taiwanese cities in Asia. From Europe there will be a total of fourteen cities selected from different Member States.

The project seeks to develop urban cooperation and foment city-to-city partnerships between EU and non-EU local authorities in Canada, South Africa, Singapore, South Korea, Taiwan and Hong Kong. The goal is to facilitate the sharing of information and transfer of good practices and lessons learned on sustainable and integrated urban practices and policies between participating cities, in order to contribute to a learning process based on concrete examples and best practices, as well as facilitate business cooperation and local economic development, including low-carbon development. International responses and experiences will be pooled for the benefit of participating cities on the challenges faced by cities worldwide on the themes of 1) circular economy, 2) air quality, 3) energy transition, and 4) integration of migration of migrants and refugees.

The programme will prepare, run and evaluate working meetings and study visits in both EU and non-EU countries. A collaborative on-line platform will be established to facilitate the exchange of information and good practices. In addition to regional and local authorities and, on the basis of the European experience, the project focus will be concrete and operational and involve as much as possible stakeholders from both EU and non-EU countries such as firms, public and private agencies, Universities and research centers.  The intervention areas will be decided by the involved cities with strong support of the project team, and in coordination with the EU commission (DG REGIO), the EU Delegations and offices in the respective countries and territories and national authorities of the non-EU countries where relevant.